Rural, Urban, and Suburban: Food insecurity can be found in every type of neighborhood: urban, suburban, and rural. While some residents of these areas share a common state of food insecurity, the challenges and contributing factors differ from area to area. 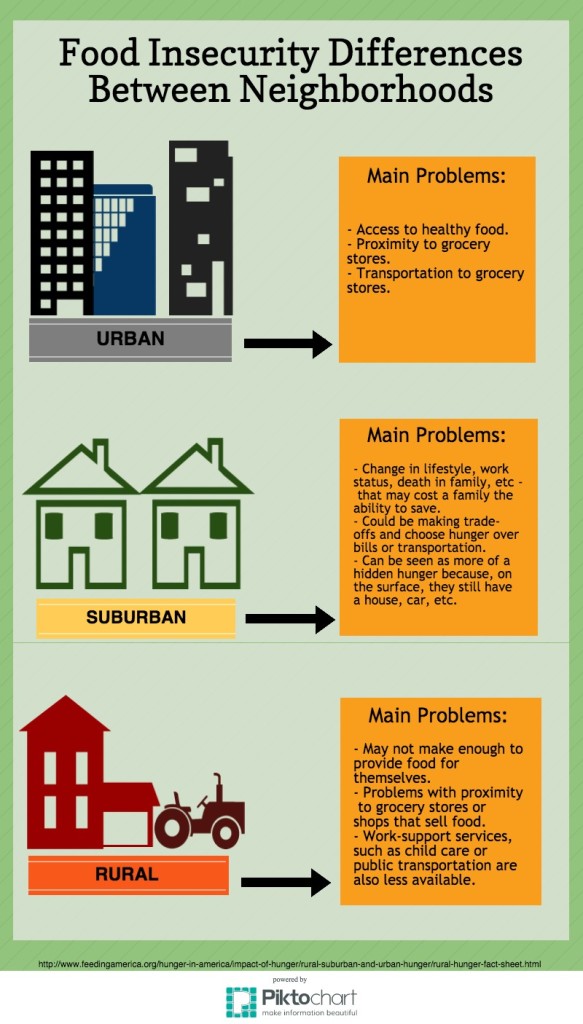 According to Feeding America, 52 percent of high food insecurity rate counties are rural and 24 percent are urban. The challenges between the areas differ in several ways. One of the main problems in urban areas can be access to healthy food. While there are various food sources like corner stores, bodegas and markets, grocery stores and stores that contain healthy, affordable food are less common for all city inhabitants. “In the city, there’s a lot of proximity towards various sources of food,” Tom O’Donnell, Sustainability Professional at the United States Environmental Protection Agency, said. “So the issue there might be related to getting healthy affordable food to people in the local area.”

In rural areas, education levels are lower and unemployment and underemployment are greater. Many of the households in rural areas are responsible for growing the food that feeds consumers, yet they may not have enough for themselves. “In a rural community, they may live where food is grown,” Hanner said, “and then they still aren’t paid a wage that is sufficient for them to be able to self-provide for the rest of the meal that they need.” Transportation, O’Donnell said, can also be a big issue.

To illustrate, O’Donnell explains how the food banks work in the city compared to rural, farming areas. “Philabundance has somewhere in the order of 400 agencies in Philadelphia alone that they donate their food to,” O’Donnell said. “They take in tremendous amounts of food from all different sources and they distribute them out to food pantries and food cupboards. Central Pennsylvania Food Bank, on the other hand, which is in the middle of the state of Pennsylvania, they’re coverage area is actually 2/3 of the state of Pennsylvania, they have a huge geography to reach.” Philabundance, the largest hunger relief organization in the Delaware Valley, serves nine counties in total – five in Pennsylvania and four in New Jersey – and has 400 member agencies. The Central Pennsylvania Food Bank serves 27 counties with 800 food banks.

Suburban food insecurity can be seen as more of a hidden hunger, because the people that experience it may still have a house or a car, yet due to an outstanding circumstance, they could have lost the ability to maintain their lifestyle. In this case, people may start making tradeoffs “that involve facing hunger versus paying for transportation and other bills that they need to sustain,” Hanner said.

The challenges pertaining to food insecurity differ across neighborhoods. This can range from transportation and accessibility to lack of work-support or child care services. Yet the residents still share the common issue of not having enough food.