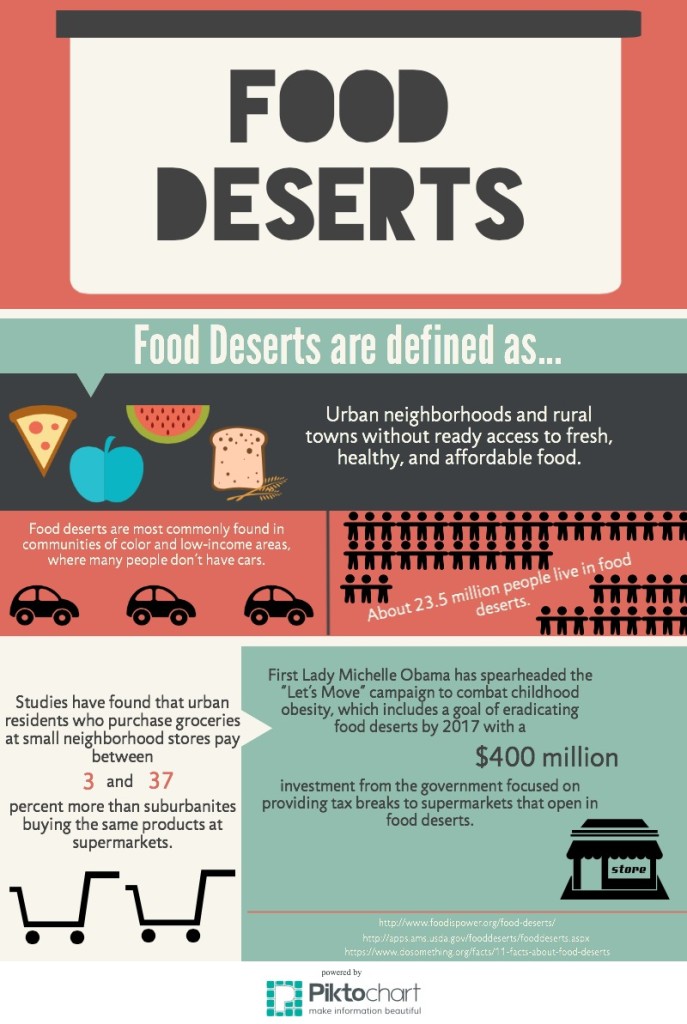 Food deserts are defined as urban neighborhoods and rural towns without ready access to fresh, healthy, and affordable food. Food deserts could be problematic in a number of ways: food is more expensive in corner stores than in grocery stores, the food isn’t as healthy in corner stores, and individuals living in urban and rural areas may have trouble getting to the food supply.

“In the city, there’s a lot of proximity towards various sources of food and so the issue there might be related to getting healthy affordable food to people in the local area. But out in the country and where it’s more rural, transportation is a very big issue,” Tom O’Donnell, ECG Fellow at Cabrini College and employee for the Sustainability Partnerships for the United States Environmental Protection Agency, EPA Region III, said.

About 23.5 million people in the U.S. are living in food deserts, and more than half of those people are low-income. In addition, studies have found that urban residents purchasing groceries at a small neighborhood or corner store are paying between three and 37 percent more than suburban residents who buy the same products at the supermarkets according to foodispower.org. Karen Hanner, Managing Director of Manufacturing Product Sourcing of Feeding America, also agrees that there are different conflicts present depending on the area in which an individual lives. “In an urban environment, there may not be access to healthy food in the community because the client may not have a car and may not be able to get to a grocery store where there’s affordable food,” Hanner said. “In an agricultural community, in a rural community, they may live where food is grown and then they still aren’t paid a wage that is sufficient for them to be able to self provide for the rest of the meal that they need to be able to provide. In a suburban community, which is where many of us live, it might just be that the family isn’t able to provide.”

Patrick Druhan, Director of the Food Resource Center, Community Action Development Commission Montgomery County (CADCOM) works in Norristown, Pennsylvania, a city that is commonly referred to as a food desert. Although Druhan believes that Norristown is not actually a food desert, he also believes that a large supermarket wouldn’t work in an urban area like Norristown. “We don’t have the space, we don’t have the capacity and we’re talking about just a marginal part of the population that would be supporting that market. It’s not going to be economical for a major supermarket to come into town, so it’s a bit of a pipe dream,” Druhan said. “You can look at Ambler, you can look at the Main Line, Conshohocken, they’ve all lost their small supermarkets… and it’s not because they’re poor, it’s because those supermarkets can’t make money relative to the larger ones. So you end up with some smaller operations like the Dekalb Thriftway, which can make some money – not a lot of money, but they make some money by locating in a smaller borough like this. But the idea that someday a GIANT or SuperFresh or something like that is going to come into Norristown, I don’t think is going to happen. But we’re not a food desert technically under the rules because the rules are that you don’t have a supermarket within two and half miles, and we have a lot of supermarkets within two and a half miles.”

Although this is a problem that affects multiple classes of people, there is a new initiative to eliminate food deserts by 2017. According to dosomething.org, First Lady Michelle Obama has spearheaded the “Let’s Move” campaign to combat childhood obesity, which includes a goal of eradicating food deserts with a $400 million investment from the government focused on providing tax breaks to supermarkets that open in food deserts. With the help of the government and individual efforts, food deserts could very soon be a thing of the past.