Margaret Errington has used benefits from the Supplemental Nutrition Assistance Program (SNAP), formerly known as food stamps, for the last three and a half years as a result of losing her job, and does not believe the government provides enough financial assistance to survive if it was a person’s only income. “The government does not provide you enough to survive on. I mean, $189 a month for food stamps to feed a family of three? You sort of have to stretch that.”  Many people have to look at what is cheap and what is on sale. This can mean many products that are high in saturated fats, carbohydrates and salt. Fresh fruits and vegetables are expensive in comparison, and SNAP users purchase what will go the furthest for their money, mainly those cheap, high calorie foods. These types of foods seemingly contradict the MyPlate suggestions, but because of costs, many who suffer from food insecurity or use SNAP believe cheaper is better because they can get more for their money. According to Errington, “You eat lots of pasta and hot dogs…you buy what’s cheap or whatever is going to last you the month.” 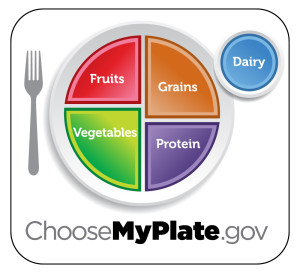 While the federal government funds campaigns like MyPlate, with recommendations for a well-rounded diet, many wonder how it is possible to afford these nutritious foods while on government assistance, considering how much more expensive they are compared to their calorie-dense counterparts.  “I think that if the government actually went situation by situation instead of doing it overall. Like when I started working at Target, they cut the benefits in half,” Errington said. “I think if they provided you for what you needed and while you were still working, that would be great.”

Using MyPlate as the example for a healthy diet, the federal government has taken the initiative in trying to help people eat healthy. While this initiative has set the standard for what an individual should consume daily, many cannot consume what has been suggested, because of cost or lack of access. The end goal is to give everyone the means to have these healthy foods, and to help them live a healthier life based on these diet recommendations.

Next: Calorie Dense vs Nutritionally Dense